We often hear about how Hollywood is churning out sequels left and right more so today than ever before. Even movies that were not that big are getting sequels these days (example: Grown Ups 2), or even movies that were full on flops (Smurfs 2?!), or sequels that should have long been killed (Scary Movie 5, Fast and Furious 6 – and part 7 is set for a 2015 release, Bourne 5, etc). But it’s not ending any time soon, because the business is of playing it safe and releasing “sure shots” when it comes to movies generating revenue even if the actual movie is crap.

Interesting list of sequels in the works at http://www.denofgeek.com/movies/24211/111-movie-sequels-currently-in-the-works

Even movie sequels you left for dead “The Last Exorcist, Part II”, let alone “Bill And Ted 3” and “Blade Runner 2” are looking to cash in. And while “A Good Day To Die Hard” would technically be Die Hard 5, they’ve already planned a part 6!!! Or 21 Jump Street 2 (which isn’t even based on the TV show, but taking the branding of it as a marketing chip). This lack of creativity in Hollywood perhaps?! Even first parts are based on existing stories such as comic books or novels. And while many of these blockbusters are not my thing, I’ve seen a few of these in the cinema thanks to various friends of mine convincing me its worth a shot. Perhaps there are a couple that I didn’t mine, but then again, some of these movies that people loved, I felt were horrendous. Even the special effects looked too much the C in CGI. This used to really frustrate me when I was younger. WTF is with these movies, where’s the plot, etc.

It doesn’t bother me anymore though and I attribute a good portion of it to a couple of people telling me (on separate occasions but within the same month) several years ago that its mainly because when they go see movies, they want to “escape”. They want to veg out, escape their day and be entertained. Upon hearing this, it clicked. Not everyone is a film snob, wannabe writer, director, actor, etc. Most people don’t mind playing it safe and seeing a sequel to something that they know they liked, or seeing a movie because a one-liner and some special effects that make fictional things come true on the big screen looked cool and can compensate for any bad acting. Movies don’t always have to be memorable or meaningful I learned. So I thought and realized, yeah sure, I like a lot of comedies that in many people’s eyes are pretty stupid perhaps. However, its unique, it’s focusing on the acting, the delivery. But there’s more to it than that. Escapism indeed is a big source of why people watch these movies. And that factor peaks more at certain times. When times are tough, more people want to escape. When attention spans are short, more people want to escape. And both of these were factors recently.

When the economies are good, more descriptive flicks make it to the big time. Think about the wave of documentaries that crashed ashore in 2004-2008 (actually there still is a lot of strong documentary films out there, but its reverted to a more artist/critic based fan base). Or how movies transitioned in the 80’s to 90’s and then blew up into more of a business model. Thinking about compiling research on this, I looked around for info and things that could back up or counter this argument: and for the former, things like this piece from the LA Times – http://articles.latimes.com/2008/oct/26/entertainment/ca-chocano26

Or this detailed research piece at http://akinokure.blogspot.com/2012/07/sequels-and-adaptations-in-popular.html – where he “went through every year from 1936 to 2011 and tallied how many movies in the box office top 10 were a sequel or adaptation”. Though this can be misleading, as a top 10 list does not a market overview make, however still a great start (and way more time spent than I could pull off, so much thanks to this person, who has a few really good reads on his blog overall by the way) – and this graphic shows the recent explosion of sequels. 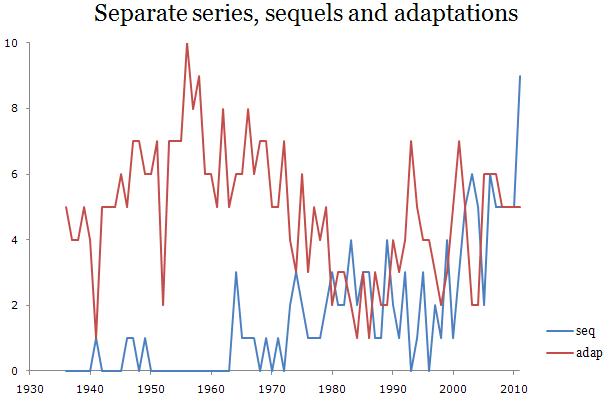 However, the level of adaptations (usually a book that gets made into a movie, so still more unique than say a sequel) has been around for a while. The study and blog post around it, compares movie sequel trends and escapism to some extent with homicide rates rather than economies, however traditionally crime and bad economies do go hand in hand, so I felt that this was a good resource of info when looking to get some data myself. And it backed up my thoughts about creativity in movies correlating with “boom times”, such as the 60’s and 80’s, and lack of during down times like the 70’s, early 90’s, and the 2008 wave when the economy took a hit (which in years prior such as 2004-2007 was a big documentary run).

Despite the recent recovery, there was been a down trend in box office revenue, as feeding sequels out one after another seems to be running out of gas. And maybe people want substance sometimes, or at least the right mix of it. As per this quote on http://www.huffingtonpost.com/2011/11/17/movie-attendance-economy-recession_n_1097904.html – where “Stephanie” a woman in her 20’s commented “The end product doesn’t have to be a mishmash of expensive stunts and large explosions. If there’s something a little more interesting happening underneath the surface with that script and with the main characters, I’m going to walk away from the theater much more satisfied and likely to return” – so perhaps its not just me after all?

Overall, its a piece I’d like to build on when I get more time, but the thing is, its not a surprise to see that film is a business like many others, and like in other industries, it takes a few standout pieces to revolutionize it and push things forward within that industry. Do we think we can contribute that? We hope so, and that drives us. But unlike when I was in my youth, I know not everything has to have that message and there are many reasons people will like something. Good acting, good stories, good scene/visuals that feel real, and most importantly good delivery, that’s something we want when putting down money to see a film whether as a means of escaping or not.

Note: This post was tweeted with the hashtag #2013movies – and I discovered that there’s a lot of enthusiasm for this summer’s crop of movies, mainly commenting about the more anticipated sequels.  One guy even commented that movies need not be good for this summer’s crop, just get them out in 3D. Escapism is in full swing I guess!